John’s opening remarks to a Keynote have sometimes been delivered “incognito” – either in the guise of an “expert” – or a high ranking bureaucrat connected to the industry represented at a conference! With a persona and script carefully worked out beforehand with the organisers – John can pretend to be about to deliver a very dull and boring speech – or to introduce stringent new legislation that will impact the audience! This can include proposals that are clearly outrageous ….  but just about plausible!

After a few minutes ….  the pretence is revealed …  and John develops the speech as  part of his “Restless Curiosity” theme: don’t make assumptions – challenge your beliefs – “things are not always what they seem….”!

Here’s how it worked at a recent conference:

Feedback: while the organisers were delighted with the response – this email from a member of the audience is far more eloquent!

“Thank you, Thank you and Thank You again for one of the funniest presentations – for it was a lot more than a speech – that it has been my privilege and pleasure to witness. It was fantastic!

I was absolutely “hooked” on the wrong line with your opening and had even written on my programme that “This man is crap” and “What is Trickey up to booking this guy?” before passing the programme round the table for others to simply nod in agreement.

Then the relief as you revealed your true self and gave an outstanding performance containing so many core management messages for the assembled audience. Believe me when I say it takes a lot to keep the SAPCA Crowd quiet and so enthralled as you clearly did on Monday. It really was mesmerising at times.” Roger Davis, SAPCA Delegate

If you’d like to read my opening speech – and see how the Teletubbies were concealed in it …  and what “Robert Ostead” is an anagram of …  see link below! (Every time I read it – I can’t stop laughing – how I kept a straight face when delivering it I will never know!)

A similar approach was used for the UK staff of American Life Insurance giant MetLife – with “Robert Ostead” up to his tricks again – making two appearances – one as “National Compliance Director for Solvency II Implementation” and one as a Director of the newly formed  Financial Conduct Authority – for different audiences of course!  You can read his opening scripts here:
MetLife.SolvencyII
MetLife.FCA

If you’d like John to keep your audience on their toes and challenge their assumptions – get in touch to discuss who he can be at our next event!

BACK to Keynote Case Studies 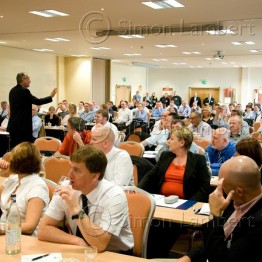 “Just wanted to say thank you for a great speech and presentation yesterday, we had a number of people comment on how informative and entertaining it was and we all really enjoyed it! ”