In this final part of my series of blogs on speaking in “awkward venues” I will be looking at some of the more unusual challenges I have had to deal with as a speaker – despite the events being held in what are otherwise beautiful, historic  locations!

1) The SS Great Britain:
It may seem churlish to call Isambard Kingdom Brunel’s ground-breaking masterpiece an “awkward venue” …  but I am only referring to the pillars in the spectacular “dining saloon”! Pillars and alcoves are a common problem for a speaker –  as they can result in the audience being “out of sight and out of mind” – as mentioned in my first blog on the subject. The all important eye contact is lost and you have to work all the harder to ensure you involve those who have a restricted view.  The way I deal with it is either to re-arrange the tables when I arrive to improve sight lines – or to simply keep moving as I speak so that the tables with a restricted view get the occasional glimpse of me!  Where this is not practical – I have often made a note of the names of all the people who are sitting behind pillars – and then used their names during my speech to ensure they don’t feel left out! As you will see from this photo of the Dining Saloon on the SS Great Britain (where I have spoken several times) it is certainly not possible to move the tables – or the bench seats – so half the audience is facing away from you! Having to crane your neck to see a speaker is not conducive to a relaxed audience! (The problem with bench seating was also discussed in this post) 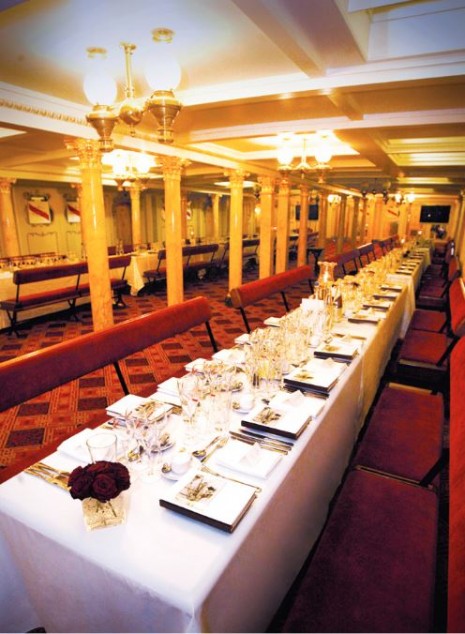 2018: An update – and an apology to Isambard!
After writing the above in 2015, while the advice about pillars and sight lines is still relevant – it no longer applies to the S.S. Great Britain! On a subsequent visit to speak at an insurance dinner I was mentally prepared for the “awkwardness” of the Dining Saloon referred to above. I happened to mention this to the banqueting manager (who was getting to know me quite well by now!) and he said that as I had not mentioned it before he had not told me that the seat backs of the benches were in fact reversible – so the diners in the centre aisle could sit facing inwards thus improving their sight lines!  So at the start of my speech I made those in the middle get up and stand behind their benches (chaos ensued!) – then flip the backrest away from them and sit so they could see me! Ingenious! Thanks Isambard! (If you are a speaker and you are booked to speak on the S.S. Great Britain – remember this tip!)  See photos before and after the “seat-back flip” below! 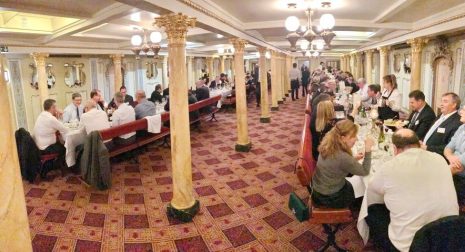 2) The Maritime Museum, Aberdeen:
Another speaking challenge was encountered at a product launch held by a company who made underwater GPS systems for the offshore Oil Industry. Appropriately, the event was held at the wonderful Maritime Museum in Shiprow, Aberdeen. The challenge? The exhibits are on several floors …. and I was asked to speak from the floor of the atrium …. with the audience standing around the balconies of the floors above me! So no chance to learn names, no seats (so they could easily have walked away!) and a dodgy microphone! This was perhaps the greatest test of my communication skills …  and I am pleased to say I survived – despite getting a crick in my neck from having to look up most of the time! 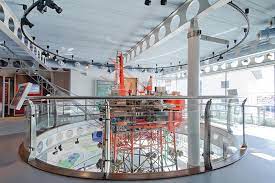 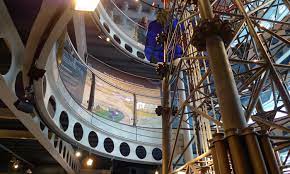 3) Temperature!
Though not strictly anything to do with an “awkward venue” – the comfort of your audience is something that has to be taken into account – whatever the venue. No matter how good you are – if the audience is hot and the room “stuffy” – or conversely – freezing cold – you need to be aware that their attention span will be affected. My advice would be to speak up and shut up! That is – hit ’em hard and don’t go on too long!  Being able to adjust your speech according to the conditions and how much they are affecting the audience is a key skill for any speaker.

In a previous post I have already described the time I had to speak to an audience of 120 Primary School Head Teachers – with a blizzard blowing outside and yes you guessed it – the heating failed! So I was faced with an audience in winter coats, scarves, gloves and woolly hats ….! You can read how I got on here.

Conversely…  I also remember speaking on a hot summer’s evening at the Hilton in Bristol to an audience of 250 Insurance brokers … and the air con wasn’t working! It’s always disconcerting to speak with what seems like half the audience fanning themselves with their menus during your speech! Which made the following comment from the dinner organiser all the more welcome!

“The room was extremely warm, the wine was freely flowing and yet you managed to keep the attention of your audience until almost midnight – no mean feat. I just wanted to add my personal thanks for playing such an important role in what was a thoroughly successful evening.” Chris Clarke, President, BIBA South West

And finally … for the record – some venues I have spoken at that were more “unusual” than awkward! For example:
– at 30,000 feet in the First Class section of a Virgin Atlantic flight to New York – on the first (and only) 747 owned by Richard Branson in 1985 (The “Maiden Voyager”)
–  on a racing yacht in the Solent during Cowes week;
–  in a limousine travelling from the Motorcycle Museum to the NEC – to an audience of one (a sales presentation to a CEO on behalf of Securicor Telecoms!);
– with the Royal Family standing behind me*; (*see photo in footnote)
– in the office of the Chief Buyer for B&Q (a sales presentation for a company making spray paint!);
– and most enjoyably for me – the England Rugby Team’s Changing room at Twickenham! See pic below!

Versatile? Moi? Well I do love a challenge – all grist to the Mill as the saying goes!

If you are looking for an entertaining keynote or after-dinner speaker – especially in an unusual venue – please get in touch to discuss your event!

*at a dinner held among the waxworks at Madame Tussaud’s ! 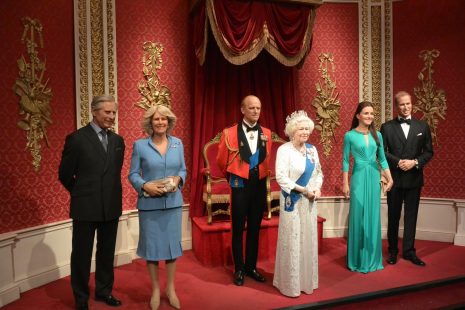