Continuing from my previous post – here are some more challenges presented by venues that may be spectacular, iconic and memorable – but not necessarily “speaker friendly”! These are considerations that affect the “energy” in a room:

1 High Ceilings: Accepted wisdom among speakers and comedians is that it’s harder to get laughs in a room with a high ceiling than a low one. Why should this be?

In his book “On Being a Comedian” Oliver Double says that a successful performance involves “an exchange of energy between performer and audience”, and that low ceilings are crucial, because they allow laughter to bounce back and reverberate through the room, boosting the energy. He gives the example of performing at a Civic Theatre which was “a great barn of a room, both broad and long” where he found that “even with a big audience, the laughter got swallowed up by the high ceiling, allowing the energy to evaporate.”

I know what they mean!  Of course – there’s nothing you can do about it – just be aware and adapt! Whenever I speak at an event in a room with a cavernous, high ceiling – I know the audience dynamic is going to be different to those in a smaller room. I generally compensate by being more demonstrative, more aware of positive body language – and the need to speak slowly and clearly so those at the back can hear!

Venues I have spoken at where this has been the case have been the wonderful Refectory at King’s College, Cambridge; the Long Library at Blenheim Palace (the name is a clue!); The Great Hall at Stirling Castle and The Natural History Museum (overlooked by a life-sized T-Rex!).

The Great Hall, King’s College, Cambridge.
Photo taken by me during my pre-dinner tour of the room’s extremities – to check sight lines and “ambience”. (I was due to speak from the small “Top Table ” at the far end). Photo shows view from the Minstrel’s Gallery (where an extra 30 people were seated for dinner!). 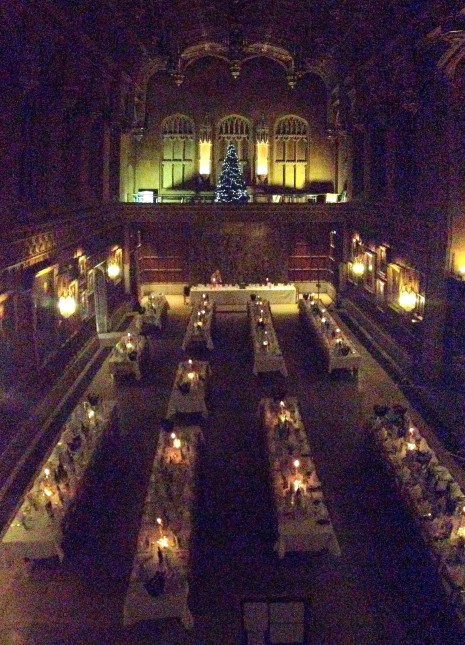 Lovely atmospheric lighting – but not for a speaker – in the distance – and in virtual darkness!

So – not for nothing do most comedy clubs have low ceilings – and interestingly – red curtains with no”blue” decor in sight! Apparently this is because red is a colour that symbolises “energy” and is thus conducive to creating the right ambience for the all important interaction between artiste and audience.

Incidentally – the above photo illustrates another “awkward” aspect of a room layout  – bench seating! Everyone in the audience is thus seated facing away from you at 90 degrees (or more) and so they have to watch you sideways over their shoulders! For speakers with a “visual” element to their speech this can be a problem – as I wouldn’t blame them for turning away when the crick in their necks becomes painful! This is why round tables are ideal because at least people can adjust their chairs to face you – benches can’t be moved!

2 A Spaced Out Audience: No I am not referring to an audience on drugs – that would an entirely different type of speaking challenge! Energy is also lost when an audience is “dissipated”.

I have long since found that if an audience is not big enough to fill a room – that it is far better to have the tables close together at one end – rather than space them out to try and fill the room – as most banqueting managers in hotels tend to do! I often get to venues early – and have been known to start moving tables around myself to ensure thay are in the best possible location – though after being told off by banqueting managers many times I now ask for their help – after explaining why!

Interestingly, Oliver Double (above) also acknowledges this fact when discussing the layout of tables at a comedy club: “by putting as many of the tables and chairs as close to the front as possible … the whole audience would be densely packed around the stage. The proximity and density of the audience meant that it was easier for a really efficient exchange of energy to occur.”

He goes on to say “Once we had become confident enough to assert ourselves with the people running the shows, we started to take charge of the situations we found ourselves in…. rearranging the space, finding the best place for the stage to be set up, adjusting the lighting and rearranging the seating. Usually, this turned an undoable gig into an acceptable one, an acceptable gig into a joy. I don’t ever remember discussing the principles behind our decision to move things around, but I do remember developing a strong sense of how a space and the way it was laid out would affect a show.”

3 Poor Acoustics: Included here because in high ceilinged rooms (is there such a word?)  the sound quality is likely to be affected – and echoes can wreak havoc with your timing! There have been many occasions that I have had to speak slowly enough so that the 2nd or 3rd echo has died down before moving on!  This can double the length of a speech if you are not careful! One of my jobs when I arrive early (as well as moving tables around!) is to conduct a sound check (poor sound systems being another bugbear – but that’s for another post!). The problem is – as Edward Tufte puts it: “a venue sounds completely different when empty (when the sound check occurs) than it sounds when full. So just trying to figure out what sounds good, let alone what sounds good all over the place is pretty difficult.”

Again – as with high ceilings – there’s nothing you can do about it – just be aware of how you sound to your audience and tailor your delivery accordingly. Here’s another pre-event photo – this time the view from top table in the dining room of Oxford University’s Balliol College:

In my next post – find out why I got a crick in my neck – speaking to an audience above me! Awkward Venues – Part 3

If you are looking for an entertaining keynote or after-dinner speaker – especially in an unusual venue – please get in touch to discuss your event!

Further reading: if you are interested in the theory and structure of comedy, speaking and presenting, and the factors that affect performance, you may wish to take a look at these:

The Humor Code: A Global Search for What Makes Things Funny
by Peter McGraw

Getting the Joke: The Inner Workings of Stand-Up Comedy (Methuen Drama Modern Plays) by Oliver Double

The Naked Jape: Uncovering the Hidden World of Jokes
by Jimmy Carr and Lucy Greeves