Nervous speaker? How to appear confident, poised and nerveless – guaranteed!

“To be a great champion you must believe you are the best. If you’re not, pretend you are”  Muhammad Ali

As discussed in a previous post – most people are more afraid of speaking in public than death! If you want to know how to appear confident, poised and nerve-free – read on!

OK admission time!  Note the word “appear”! The fact is – it is good to have a certain amount of “nervous energy” before any performance – sporting, entertaining or speaking! What we call  “Nerves” is simply the result of adrenaline getting you ready to do your best – it is your friend – and you should be grateful for it! (Tip: use the word “excited” to describe your feelings – which is more positive than “nervous”! Re-framing your anxiety into something positive and exciting, and focusing less on the potential for things to go wrong can work wonders for your confidence!)

So what is the solution to “appearing” confident and nerveless? Simple! Just “pretend”you are!

Sorry if you were expecting a miracle “cure” for nerves – but this technique works just as well!  The good thing is…  “pretending” you are confident can get you through a seemingly difficult speaking engagement – and the more you pretend, the more you will learn how to do it for real!  The audience will not know the difference if you pretend well enough!

Here’s how to do it:

Firstly: watch and study good speakers, especially comedians and entertainers. Watch their body language, see how they have a “swagger” to the way they walk on stage and how this communicates confidence, poise and utter comfort in what they do. They “own” the stage! Malcolm Gladwell in his book “Blink” says we make a judgement about a person in miliseconds….  based on non verbal cues – especially body language. Have a picture in your mind of the way successful performers behave – absorb their characteristics and “model” them!  Adopt their confident behaviour – their “chutzpah” – and you are off to a flying start before you even utter a word! Be enthusiastic: enthusiasm is infectious and makes an audience relax and want to join in – knowing they are “in safe hands”. While you may be terrified – your audience will be fooled into thinking you’re not if you imitate the persona of a confident speaker well enough! I often say to myself before I’m introduced “be bouncy, sparkle and SMILE”!

Something else to remember is “you’re on before you’re on”! From the moment you arrive all your interactions with your client and their guests must communicate your charm, warmth, poise and professionalism. This is especially important if you are attending the dinner as a guest before speaking (which I always do, as this is when I can chat to my fellow guests and pick up information that I can add to my speech). This means the audience have up to two hours to observe you – and they will – knowing you are the “guest speaker” so their curiosity is piqued!  So don’t look and behave like a miserable sod! Make sure you also adopt positive body language at the table during the meal! Smile, chat to your fellow guests – and try not to look too serious – which can easily happen if you are mentally rehearsing! Another tip I picked up from Alan Wright (North East radio presenter and after-dinner speaker) is that if you are only drinking water (I never drink alcohol before speaking) you can look a bit boring – as if you are not “joining in” the festivities! He suggested having a glass of red wine in front of you as it shows up better than white wine – and a glass of water next to it for you to drink!

Secondly, know your material. I am not describing a technique to make you appear to be an expert in something when you’re not – that would be dishonest! As described further on – it is a method to help you cope with nerves and confidence. In particular – your opening is crucial to set the tone and establish a rapport. You must research, write, learn by heart and rehearse the first 30 seconds of what you are going to say so it is flawless and second nature! ! Once you are up and running and the audience has decided you know what you are doing, they will accept you and relax – and so will you!

Thirdly, in your pre-event preparation, VISUALISE the talk. See it going well – as vividly as you can. Make it seem real! It has been said the brain finds it difficult to differentiate between a vividly imagined experience and the real thing.  So visualise a successful talk – with everyone loving what you do, laughing in the right places and hanging on your every word!  Vividly use your imagination to “see” yourself speaking confidently and with total control….  imagine the room, the audience, their reaction, the lighting, the smell, the temperature – everything! Employ as many visual and physical cues as you can. I do this almost from the instant I receive an enquiry for a speaking engagement – often months before!

As the date approaches I do it with greater intensity, and when I actually arrive at a venue I go straight to the room and study the layout so I can get my imagination working on a successful performance. Here’s the thing – by visualising a successful speech – several times (the more the better) – you are in effect doing the speech in your mind.  This means when you come to do it “for real” – you will have already done it where it has gone “brilliantly” – in your imagination!  Thus doing it for real won’t be for the first time!

French pharmacist, hypnotist and pioneer of the use of “autosuggestion” Dr. Emile Coué had this to say:

“We possess within us a force of incalculable power, which, when we handle it unconsciously is often prejudicial to us. If on the contrary we direct it in a conscious and wise manner, it gives us  mastery of ourselves.” He believed that in any conflict between the will and imagination, that our imagination is always stronger. It is therefore probably true to say that the undeniable power of hypnosis and hypnotherapy have more to do with helping people to unleash the power of their imagination, rather than “mumbo jumbo”.

“Mental practice” is a form of autosuggestion, and although it is a well known tool for athletes and sportspeople, it is just as effective for speakers. I find this works especially well just before you nod off to sleep – run through the speech – imagine it going well – and it will seep into your mind as something you know and are comfortable with. It primes your sub-conscious to work on it while you slumber! The same applies to when you wake up – in that dozy period before you get up – wallow in the imagined laughter and applause!

A note on body language:

Harvard Psychologist Amy Cuddy in her TED talk (the second most viewed of all TED talks) describes how our physiology and behaviour affects our attitude, and can cause changes to our brain chemistry. Her research showed that simply adopting powerful body language can significantly increase the testosterone and cortisol levels in the brain. Cuddy suggests that our attitudes often follow from our behaviours, as opposed to the other way around. That means assuming the body language of a powerful person can make you feel confident. She outlines the concept of the “power pose” – making your body as large as possible, and how adopting a position with arms outstretched for a few minutes before you’re  “on” can greatly affect how you feel – and how you perform!

What’s more, Cuddy says, adopting the body language of a powerful person changes the way other people see and act toward you, which in turn reinforces your confident behavior. Despite the controversy surrounding her findings (relating to failed “replication” tests carried out by other researchers) I know from personal experience that standing tall, plastering a smile on my face, using expansive gestures and looking the audience in the eye makes me feel good – and feel confident! This communicates to the audience in ways I don’t understand – but it works!

You can read Cuddy’s response to the criticism HERE.

As Cuddy sums it up: “When our body language is confident and open, other people respond in kind, unconsciously reinforcing not only their perception of us but also our perception of ourselves.” She describes the principle in a variation of the well known phrase “fake it til you make it” – her take being “fake it til you become it” – in other words if you impersonate a more confident speaker by acting the part, you will eventually become the part.

The problem with the word “fake” – I feel – is that it seems to indicate a dishonest pretence of competence. Unfortunately … it might just be that you are NOT not in fact suitably qualified, knowledgeable or experienced enough for the task in hand!  In which case I’m afraid no amount of positive body language can give you expertise! You must study, research and “know your subject”. This was addressed by author Roger Hamilton in a blog post called “Fake it until you make it.” – Why is this the worst advice EVER?

However I feel this is to misinterpret what Amy Cuddy is saying. Her advice is more to do with acquiring confidence in the delivery of material that you already have knowledge of and are competent to present, as well as to give you confidence in stressful situations such as job interviews where you have the necessary skills for the job – but may lack the chutzpah to convince an employer of this!

The technique as described is designed to impart confidence rather than competence. So, this means “Fake it (i.e. confidence) til you become it” is perfect advice!  I prefer to describe it as “Assume it til you own it” – as “assume” is a milder version of “fake” – without the negative connotations! “Own it” refers to acquiring the competence through study and hard work! You can read blogger Jeffrey Davis’ views on this here: Confidence: Make it. Don’t Fake It

He attributes the origins of  the “fake it” principle to a quote by Aristotle, who observed that “Men acquire a particular quality by constantly acting a certain way” – if you’ll forgive the inherent sexism of the Ancient Greeks! In another take on the subject Aristotle also famously said “we are what we repeatedly do”.

American psychologist William James was the first psychologist of the modern era to describe how behaviour and actions influence mood, describing it as the “As If” principle. Namely – behaving “as if” you had the desired qualities you would eventually assume them – which is exactly what Amy Cuddy is saying! This was also developed by Richard Wiseman in his book  “Rip It Up“.

The effects of powerful body language are further examined in Amy Cuddy’s brilliant book “Presence” – where she elaborates on the “power pose” concept outlined in her TED talk mentioned above. Despite the controversy surrounding the significance of her findings…  if it works – it works – and that’s good enough for me!

Here are 3 recent screen captures from my TV of some British performers who have either read it – or are adopting their Power Poses naturally! From Top Right going anti-clockwise: Russell Kane, Miranda Hart, Jimmy Tarbuck …. plus… from my archives – me!!  I am glad I am practicing what I preach! 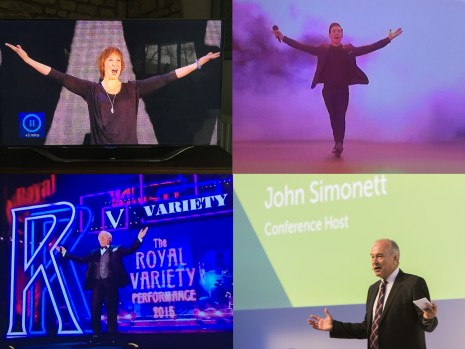 Want to speak with confidence? Try it!

Are you a speaker who has experience of “coping with nerves”? If so please share your observations in the comments box below!