A CV is not an intro!

Introducing speakers properly is an art that involves far more than just reading out a list of their achievements and qualifications. It is also a role often underestimated by event planners. A speaker’s introduction should heighten an audience’s anticipation and set the scene for what is to follow. Experienced speakers know that their speech begins when they are being introduced… not when they start speaking!

While “in house” (unpaid) company speakers may not think it necessary – a professional speaker should always have their own prepared “introduction”. After all  – you know better than the MC who you are, what your content is  – and what you are trying to achieve in your speech! Why let somebody else say “what they like” which may be completely wrong! A written intro puts you in control and can help get the audience on your side before you say a word! So it’s worth stating again: your intro should be considered an integral part of your speech.

In fact – I would go further – as a speaker you are always “on” – from arriving at the venue, meeting the client, being seen by the audience pre-speech – and in the aftermath when it’s all over. In other words you must be consistently professional in the way you behave at all times. Audiences are very perceptive and will note subtle clues that indicate you are not fully “engaged”!

A good MC or conference host will ensure a speaker is given the best possible start. Unfortunately I have seen many inexperienced hosts give introductions that fail miserably at best – and at worst alienate the speaker in the eyes of the audience. Quite often this is as a result of the introducer trying to improvise and be “funny” …  which can often fall flat. Whose fault is this?  The speaker’s of course – for not having a prepared intro!

The following tips apply to two distinct types of speaking – an after-dinner speech and a conference keynote.

AFTER-DINNER INTROS: The intro for an after-dinner speaker is often simpler than that for a keynote – as the speaker is less reliant on imparting information or “content”, and is mainly there to be humorous and get laughs. Nevertheless it is still important to let the audience know who the speaker is (especially for us “non-celebs”!) and that they will be entertaining!  If you can craft the intro to get you “on” to a laugh – you are already up and running and seen as “likeable” in the audience’s eyes!

A word of caution: some hosts craft overenthusiastic intros saying that the next speaker is “fantastic” “hilarious” and “the best I have heard” and “you are going to love him/her” … these can often be counter-productive – and make the audience think “go on then – make me laugh” ….  In fact I always prefer a slightly downbeat self-deprecating intro ….  on the principle of “under promise – over deliver”!  If you start with a low expectation ….  and are half good …..  they will be much more impressed than if you start with the big build up …  and are still “only” half good!  (Even if you give the same performance – the former is seen as an improvement on expectation ….  the latter – a disappointment!)

KEYNOTE INTROS: A conference keynote, on the other hand, often requires a more in-depth approach, and should achieve three things:

a) Establish why the audience should listen to this speaker (a brief summary of their expertise and/or experience to establish credibility).
b) Outline the subject matter and the title of the talk
c) Build interest and anticipation by detailing WIIFT (What’s in it for them) i.e. what they will learn, and what the outcome and benefit of the talk will be.

A sentence or two for each of the above – and 30 seconds max – is what you should be aiming for – ending with the speaker’s name.

While brevity is important … remember the introduction sets the tone and should create a sense of occasion and anticipation in the audience, so some degree of “build up” is necessary. However – as above – letting the audience know the next speaker is brilliant can be done without hyperbole or reading out their entire career history – and without gushing insincere cliches!

If appropriate – you can also include gentle humour through a reference to a hobby, “claim to fame”, sporting passion or achievement outside “work” to “humanise” the speaker. Cheeky joke-type remarks are generally inappropriate at a conference – but a simple comment can add a touch of informality and help relax an audience – and the speaker. As in “He is also a single figure handicap golfer – bear that in mind if he offers you a side bet in tomorrow’s tournament….!”

The name of the speaker should not be mentioned until the end of the intro so is ALWAYS the LAST thing you say – possibly preceded by their title – as in “Please welcome Regional Sales Director EMEA  – David WILLIAMS….”. If the surname is said with emphasis (but not shouted as if introducing a comedian!) then it is usually sufficient to prompt a round of applause – especially when used in conjunction with the phrase “Please welcome…”.

Here’s an introduction I wrote for a former Prime Minister and President of the European Commission who I had to introduce recently. It is culled from a 4 page (!!) bio sent to me by his “people”. (If you want to see the original – it’s here: JOSE MANUEL BARROSO). My precis of the original is cut to one page, yet retains the essential information. It  follows my advice: background summary to establish credibility, subject, WIIFT – and a pesonal “humanising” story. It’s here: JOSE MANUEL BARROSO edit

And here is Mr. Barroso delivering his keynote 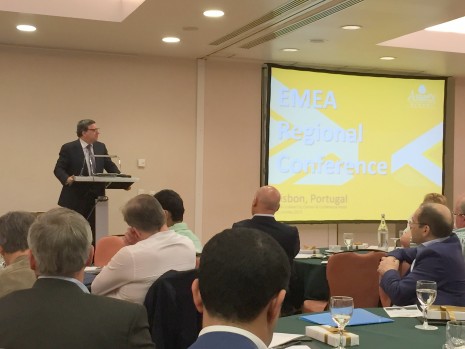 For the record he spoke for 45 minutes without notes or slides, was humorous, compelling and controversial in equal measure, offered insights relevant to the audience – and deftly dealt with some searching questions in the following Q&A (which I facilitated). In short – a masterclass in presentation skills and audience management!

Tips for speakers when writing intros:
1) Write your intro in bold, large font (18 or above) and use a San Serif font (like Arial, Calibri or Verdana) where the letter strokes are solid and the same width – and thus easier to read! Do not exceed one page.
2) Keep It Simple Stupid – and add a touch of humour if possible!
3) Email it ahead of the event – and bring a copy with you!
4) At the event go over it with the introducer – read it out to him/her so they understand any inflections, emphases or pauses – and that they understand the timing necessary to deliver any humour! Politely ask they do not improvise – but read it exactly as written … “as it forms part of your speech”!
5) The “Outro”: many speakers give little thought to the ending of a speech – but this can be as important as the intro to bring about a successful conclusion to any presentation. Of course… it would be tempting fate to pre-write an “outro” which implies your speech went well! That can be left to the host to assess! If I am doing an after-dinner speech I will simply check who is going to “wrap-up” – and usually suggest the host (or other senior person) makes some concluding remarks and “thank-yous” – implying he is to include me in those! Simply suggesting it can focus that person’s mind so that he or she is prepared to take to the floor after you finish.

For a keynote outro you can provide some suggestions. For example you can let the host know what your main points will be – and what to include in any summary after your speech. They can also be asked to mention any follow-up actions – like visiting your websites or where to buy your “product”. (Many keynote speakers sell from the stage – OK if you can do it subtly (with permission) but it is less tacky to get your introducer to do this for you!)

Addendum: since writing the above I came across three articles on introductions – all echoing the above points! They also have some excellent tips that I will be incorporating in my own introductions in future!  I have copied them into a pdf which follows – listing some very funny examples of the type of disastrous intro I referred to to the opening paragraph!

In particular – note the research quoted which shows the different audience response to two virtually identical introductions …  except for one word!  It shows the power of language – choose your words wisely – it can make a big difference to the way in which you are perceived!

They are here: On INTRODUCTIONS

In my next post I will look at an aspect of hosting that may seem unimportant – but is crucial to the success of an event – how to bring it all to an end! It’s here: Pt. 5: It’s a Wrap!

If you are looking for a conference host to ensure the success of your next event – please get in touch!

Are you an event host? If you have any tips on what you include in your preamble or introductions I’d love to hear them – and maybe adopt them! Please send me an email or post a comment below!